How Hot is Too Hot: Air Conditioning for Pets

It’s summer and it’s sizzling. Your cat has turned into a pool of fur melted across your floor and your dog’s panting is your new summer soundtrack. In a bid to beat behind-the-knee-sweat (we’ve all been there) you open up your Coolzy full blast, and your cat jumps on your lap looking grateful, which is a first. Obviously while you’re home you can ‘chill’ together, but what about when you go out, should you leave your air conditioning on for your pets? 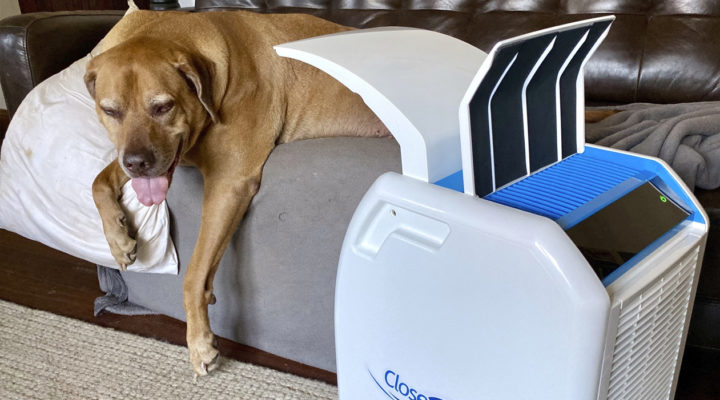 Pet Air Conditioning: Yes or No?

The general consensus from veterinarians is YES; create a cooler environment for your animals, because if you’re suffering from the heat, your 4-legged friends most certainly are.

Dogs and cats generally run 5 – 7 °F (3-4°C) hotter than humans and unlike us they can’t sweat. As they can’t drop their furs off at coat check they have to deal with the heat their own way…

Dogs keep cool by panting, which evaporates moisture from their lungs and takes the heat away from their bodies. However, in extreme heat and humidity, panting simply exchanges hot air for hotter air, which can leave them at risk of heat exhaustion.

When it comes to keeping dogs cool, short-nosed dogs like Bulldogs or Pugs cannot cool themselves easily enough through panting and dogs that come from colder climates and have shaggier, thicker coats, like Newfoundlands or Huskies need a little extra help adjusting to the heat, so aircon certainly helps.

Cats turn to grooming themselves more in hot temperatures, with the evaporating saliva causing a cooling effect, much like sweating for humans. Cats are also the masters of minimising movement when it gets too hot, as well as finding the coolest spot in the house to hide when the heat is on. But sometimes curling up in the bathroom sink isn’t enough to keep your cat cool. 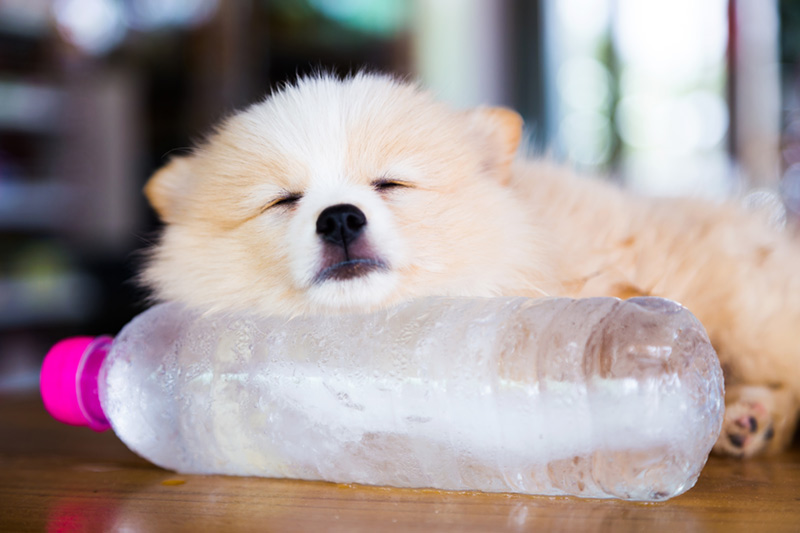 Other heat busting tips are to close blinds and curtains to create shade for your animals and to make sure they always have plenty of access to fresh water and circulating air.

Won’t my pets just adjust to the heat?

According to weather.com 2021 was the hottest on record, just ahead of the 1936 scorcher. Four of the five hottest summers have been witnessed since 2010. With summers getting hotter and drier and energy costs climbing, finding effective and financially viable cooling solutions will be an on-going issue for most households.

Some might argue that leaving the air con on for an animal is overkill as dogs and cats are very adaptive. This is true, but only to a point. While they may get used to rising temperatures over time, sudden spikes will still affect them negatively.

Is All Day Air Conditioning an Option?

With climate change now a pressing issue, leaving your energy-guzzling room or ducted home air con running all day is just not on.

Soaring power costs also make this a less viable option, especially given a recent Finder.com.au survey that revealed 23% of people admitted to leaving their air conditioner on all day when they’re not home.

As Australians collectively spend over $2 billion during summer on air conditioning, these costs can quickly mount up.

Coolzy, on the other hand, uses so little energy and has such a small amount of climate-friendly refrigerant, you can now cool your little friend all day without it being on your conscience. Plus with 75% less power than the smallest standard air conditioners, you can keep them cool for less than $1 a day, or far less with even the smallest solar panels.

You can help your pets adapt to the heat with a Coolzy-Pro, the perfect solution for a cool corner just for pets.

Small, portable and with no pipe or window kit necessary, Coolzy-Pro does as the name suggests; focused cooling in one simple plug and play action. The unit is easily portable with its wheeling action and ability to work on batteries, solar and small generators even when you’re on the road in far off places.

With its directional front flap, you can also direct the refrigerated cool air right where your pet needs it most. Direct the air upwards if they’re on a couch, or downwards if they’re a smaller pet or prefer to sleep on the ground.

Coolzy-Pro has gentle cooling, enough so that Buddy can feel the wind in his fur, along with a remote control to adjust the temperature and cooling speed as needed. Since the unit uses just 340 Watts of electricity it needs 70% less power to run than the smallest standard portable air con units, making it an energy-efficient and cost-effective solution to keep your best friend cool.

Click here to learn more about the benefits of Coolzy-Pro