Win-Win-Win for Singapore on Dengue and Warming.

Singapore just crossed a worrying milestone – for the first time in the country’s history, it passed the 1,000 mark for the number of dengue fever cases in a week. It may appear minor compared to the ongoing COVID-19 crisis, but here’s the alarming part – if the COVID-19 pandemic is a black swan event in modern history, dengue fever has been a perennial crisis in Singapore with the threat growing larger every year.

Our ordeal with dengue fever over the last two decades has a lot to do with our climate. Abundant rainfall, high humidity, and tropical-level temperatures create the ideal breeding ground for disease-spreading mosquitoes. Its climate also offers an explanation as to why the number of dengue cases continues to soar every year; recent studies reveal that temperatures may play a larger role in this crisis than what we have previously understood.

A global study published last year observed that the risk of a dengue fever outbreak grows severely greater towards the equator, establishing a direct link between temperatures and the risk of transmission. Even Singapore’s National Environment Agency warns that the risk of dengue transmission is higher in the warmer months ahead as it accelerates the breeding cycle of the Aedes mosquito vectors. This shows that the number of dengue cases peaks during May and June every year, not by mere coincidence but rather because they are the warmest months of the year. Studies also point to a much larger and perturbing picture – that the crisis is indeed worsening every year.

Singapore’s average temperature around the year is on an upward path with the annual average temperature rising from 27.9°C in 2004 to 28.5°C in 2019. The island also witnessed an increase of 11.9 warm days and 11.8 warm nights every decade since 1972.

In fact, Singapore warmed considerably – an increase of 1°C in a span of just 10 years – as it went through rapid urbanisation in the 1970s. Its continued urbanisation policies resulted in astonishing economic achievements but fell short of keeping temperatures in check.

A closer look at reveals that these are also the most urbanised areas on the island.

One of the major reasons why urbanised areas are more prone to dengue transmission is because of the urban heat island (UHI) phenomenon. All human activity and machines release heat, including air conditioners, elevators, cars, industrial machinery, and even TVs. Recent studies have shown that UHI can add up to 2.4 °C to temperatures of urbanised areas, turning them to, literally, ‘hot spots’.

Studies suggest that reducing energy consumption and planting more trees are the most effective ways out there to reduce UHI. By choosing products and services that demand less energy, consumers can not only save money from the reduced power consumption but also help slow down climate warming by keeping UHI under control.

The energy demand for lighting has come down dramatically in the last 50 years, thanks to inventions such as LEDs. It was during this same period that Singapore widely adopted air conditioning as a cornerstone of its urbanisation policy. Lee Kuan Yew famously stated that air conditioning was the critical technology enabling Singapore’s economic development. However, the current century-old technology wastes nearly all the energy by cooling the building and only a small proportion of the energy actually cools people. 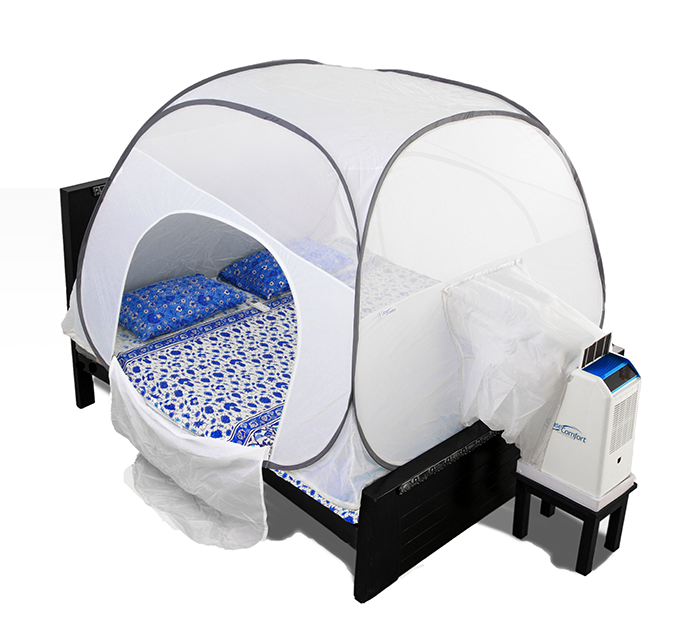 With sustainability-driven innovation taking the centre-seat in most developed economies including Singapore, consumers now have more eco-friendly cooling options to choose from. For example, Close Comfort‘s personal air conditioners cool the individual rather than their surroundings, emitting a tiny fraction of the heat produced by conventional air conditioners while consuming only a quarter of the energy. The energy consumption can be lowered even further by adding the Igloo Bed Tent which not only helps maintain cooler temperatures for sleeping but also offers a protective shield against mosquitoes and other bugs, making it a force-multiplier in the battle against dengue fever. With only a tiny refrigerant charge in all-welded tubing, personal air conditioners virtually eliminate direct greenhouse emissions.

Consumers can leverage such innovations tailored for Singapore to lead the charge against the urban heat island and dengue fever. Adopting personal air conditioning can also slow climate change: it is an effective, long-term solution for all these threats. Best of all, there are huge savings and even health benefits for consumers who adopt these new technologies. That’s an all-round win-win-win.