Soaring temperatures during Australian summers can be miserable for people of all ages, but the effect of heat and humidity on seniors and the elderly can be potentially life threatening. People aged 65 years and over are at increased risk of heat-related illnesses which range from mild conditions such as heat rash or cramps to serious conditions such as heatstroke, heat exhaustion or heat oedema, even cardio-vascular problems.

The Importance of Air Conditioning for Seniors

The physical changes that occur in the body as we get older is one contributing factor to the potentially dangerous effect of heat and humidity on older people. The body normally cools itself by sweating but elderly skin is not able to produce as much sweat and cool the body as efficiently as younger skin. When the body can’t cool itself sufficiently and maintain a healthy temperature, heat stress occurs.

This is why special care needs to be taken in hot weather to maintain a safe temperature for the elderly in particular. The best way to do that is with air conditioning. 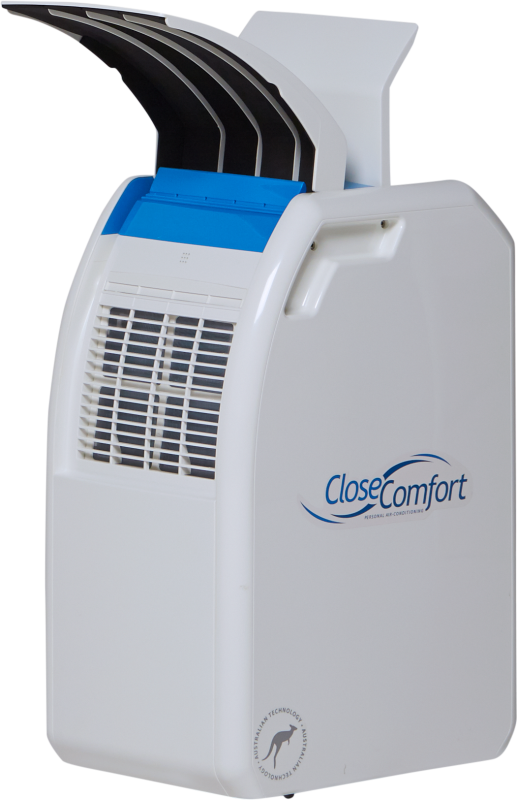 According to Climate Council research, heatwaves cause the greatest number of deaths of any type of natural disaster in Australia. With Australia facing an ageing population, rising temperatures and surging power prices, finding cost effective ways to keep seniors cool and comfortable is more important than ever.

At Coolzy, we believe that air conditioning shouldn’t be a luxury only a few can afford. That’s why we have invented a novel solution to this serious problem: An affordable air conditioner for seniors. The energy-efficient COOL FOCUS Personal Air Conditioner is designed to maintain a safe temperature for older Australians without running up electricity bills. It does this by creating a personal micro-climate through localised cooling.

With wall-mounted air conditioning units, nearly all of the electricity is wasted cooling walls and furniture rather than the people in the room. At Coolzy, we cool people not rooms.

Also known as localised cooling, Coolzy’s cutting-edge technology is designed to provide cooling only for part of a much larger space, only where cooling is needed. This means that our units are much more energy and cost-efficient than conventional air conditioners and even other portable air conditioners.

Running on just 300 Watts (an electric kettle needs 4 TIMES as much power to run), Coolzy Personal Air Conditioners are so energy-efficient, you can run them for less than $1 a night. Compared to the standard electricity cost of $0.45-0.55 an hour to run traditional portable aircons (Source: Canstar Blue, Nov 2019), this represents a 75% reduction in power costs in an average night.

International research on mortality in heatwaves has shown that a significant proportion of elderly people who died or were hospitalised in heatwaves were avoiding using air conditioners because they were scared of running up electricity bills they could not afford to pay. Coolzy uses so little electricity that you can take cooling off your list of things to worry about when it comes to your electricity bills.

10 reasons Why Coolzy is the Best Air Conditioner for Seniors

Having an effective air conditioning unit can be life saving, especially when outdoor temperatures reach an unbearable high in summer. Coolzy’s revolutionary patented technology is making the comfort of home cooling accessible to everybody.

Whether you have an elderly family member, or would like to enjoy Coolzy’s energy-efficient cooling comfort yourself, we have a cooling solution to fit your life. Order your Coolzy Personal Air Conditioner today.

For technical information on how our solution works click here.

FOR BUSINESSES LOOKING TO BUY MULTIPLE UNITS OR REFER OUR UNITS TO IN-HOME PATIENTS IN YOUR CARE PLEASE CALL OR EMAIL US ANYTIME TO DISCUSS ATTRACTIVE COMMERCIAL OPTIONS.